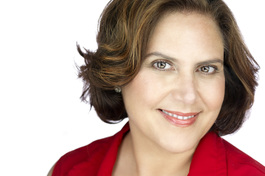 Adela’s expressive face “incantatory voice” and bouyant personality draws her audiences into the world she is portraying at any given moment. As a character actor, Adela’s qualities shine forth as a woman of wisdom, full of life, nurturing, warm, adventurous and whymsical.
Adela María Bolet has an eclectic artistic career as a Spanish dancer, opera singer, and actor based on a wide-ranging international education in Europe and the Americas.   She has played lead roles in independent films and  a principal role on Law and Order SVU in an episode also featuring Sharon Stone and Isabelle Hupert.  Adela played the innkeeper in the award-wining stage production of La Strada, an adaptation of Fellini’s film on the stage of The Barrow Group Theater in New York. In this role in Spanish Ms. Bolet acted, sang, and played percussion. In 2011, she also had five roles in a production of “Wearing Lorca’s Bow Tie” at the Duke Theater on 42cd St.  She has been seen in Central Park in a production of Twelfth Night, on the stage of  Repertorio Español as Dolores in Buela’s Centenial,  and as The Singer in New Science for the Living Theater.

YOUR FAVORITE VIRTUE: generosity of spirit
YOUR MAIN FAULT: Trying to embrace too much at once; Aah, but with such gusto!
INTERESTS: eclectic and catholic. As an actor, I’m interested in almost everything but myself.
FAVORITE COLOR: red
FAVORITE FLOWER: peony
FAVORITE NOVEL: A Hundred Years of Solitude by Gabriel García Márquez, and many others too numerous to mention.
FAVORITE QUOTE:  “Carpe diem!”   “Talent, Taste, Temerity”, Eleanora Duse
HAPPIEST MOMENTS: When I am on stage because I have done my work and I just let the magic happen.
BIGGEST TURN ON: The miracles of nature
BIGGEST TURN OFF: Selfishness
FAVORITE SOUND OR NOISE: Silence
HATED SOUND OR NOISE: Super-loud speaker feedback
FAVORITE WORD: agape
LEAST FAVORITE WORD: desarzobispoconstatinopolizador (it’s part of a tongue twister I use as a vocal warm up)
WHAT PROFESSION OTHER THAN ACTING WOULD YOU LIKE TO TRY? I have been privileged to have tried many professions throughout my life, and have learned much from each experience. Now, I feel very comfortable on the stage or in front of a camera.
WHAT PROFESSION WOULD YOU NOT LIKE TO TRY? I’m an actor, I want to try everything!
MY FAVORITE MUSIC: Depending on the mood, of course…
Bach (most any work of Papa Bach). His music is the balanced blend of the intellectual/spiritual/physical/emotional life.
Stravinsky – my dad taught me to read an orchestral score with Petroushka when I was 7.
Salsa and flamenco to dance to
Whichever composer I am studying, learning or working with at any given moment. You have to fall in love with your work (your script, your score).
FAVORITE SINGERS: Cesarea Evora, Natalie Dessai, Anna Netrebko, Plácido Domingo, Buika, Barbara Cook.
MY FAVORITE MOVIES:
On the Waterfront for it’s gritty real drama (and Brando, of course)
Pan’s Labyrinth ( for its total engagement of your imagination)
Pinocchio (first movie I ever saw. It made an honest person of me)
MY FAVORITE PLAYWRIGHTS:
The Bard, Molière, Tennessee Williams, Sophocles, Sarah Ruhl and many others who bring Truth to the stage.
PEOPLE YOU ADMIRE THE MOST:
People who have lost everything and continue to live a life without regrets (like my father and mother).

Thanks to AENY’s excellent “experiment,” Lorca’s ghost is alive and well not only at the Duke on 42nd Street, but on the streets of New York.

The litany of saints, the blowing wind, and the vision of the “vast distant city” serve as the chorus of civilizations; chorus in many respects, as in the Greek chorus of drama but also as a musical chorus, the repeated lines of a song. Amidst all the chaos of the human speech and activity, Bolet’s singing provides harmony in counterpoint. At the end, the characters recede out of sight, and all we are left with is music. Music qualifies as an organizing principle for this play because it is a collapse of science and art, mathematical and emotional, imaginative. The play itself becomes a song, that age-old bearer of history, or vision and poetry, and of freedom.

New Science sets out to recount the overall apocalypse/apotheosis of Any Metropolis, U.S.A., using a flood of visual, sonic and tactile aids to depict this rise and fall.
Four actors (Sheila Dabney, Claire Lebowitz, Pamela Mayo and Thomas S. Walker) tell the tale in part as chorus, in part solo, backed up by the amazing bass playing of Naisha Walton, the incantatory singing of Adela Bolet and a set cleared of the usual theater seating — the audience sits in clumps throughout the multi-leveled space — and partially reconstructed during the performance, dominated by a large screen on one wall that mixes silent film-like titles with simultaneous videoing of the actors in motion.